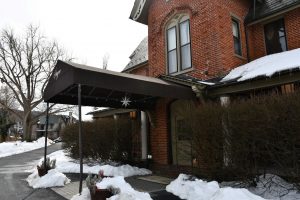 Moravian stars are a common sight around Bethlehem gracing many doorways, windows and porches. Here at The Sayre Mansion it’s one of the first things you see as you enter. How did the symbol of the Christmas City get its start? We’re shedding light on the meaning of the Moravian Star.

The influence of the area’s first German settlers remains strong in Bethlehem, as exemplified by the Moravian Star. The iconic figure was actually born from a geometry lesson. A teacher in Saxony, Germany introduced it in 1830 as a craft project to help boys attending a Moravian school learn geometry. It didn’t take long for members of the Moravian Church to recognize the shape’s similarity to the star of Bethlehem. So, Moravian Stars were soon adopted by the church as a symbol of Christ’s birth and became incorporated into Advent and Christmas displays.

As Germans immigrated throughout the world, they carried their traditions to their new homes. Decorating with Moravian Stars at Christmastime remained largely a local custom until 1880. Peter Verbeek, a graduate of the school that invented the symbol, opened a bookstore in Niesky, Germany and began selling the stars. His son, Harry expanded the business years later when he opened a factory to mass produce the stars. The Hernhut Star Factory exported its product to America and around the globe. The factory thrived until WWII when it was destroyed by the Russian army. Nearly a century after its commercial introduction, the Abraham Durninger Company opened in Hernhut, Germany in the 1980s to reestablish the custom of crafting handmade Moravian Stars.

The original Moravian Stars were white and red. You’ll find variations with everything from six points to over 100, but a traditional Moravian Star boasts 26 points. True Moravian Stars have points of equal length to symbolize the Moravians belief in equality among men and women. 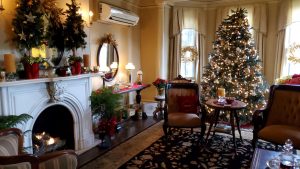 Spend some time in Bethlehem and see how many Moravian Stars you can spot. The symbol is especially prominent during the holiday season. Book our Fireside Getaway in the Christmas City and you’ll even receive a handcrafted Moravian Star stained glass Christmas ornament as a keepsake. The two night stay is the perfect opportunity to enjoy the area’s holiday festivities and then return to your deluxe guest room to enjoy a plate of house made Christmas Cookies by the fire.