Built in 1858, this historic mansion anchored the Fountain Hill neighborhood, a wealthy enclave of Bethlehem and home to the area’s industrialists and railroad pioneers.

Robert Heysham Sayre specifically chose the location of his Gothic Revival style home to be near his work. Despite little formal education, he learned his trade through apprenticeship and rose through the ranks to become chief engineer of the Lehigh Valley Railroad. He also founded and maintained partnership in Bethlehem Iron Works, which would later become the sprawling Bethlehem Steel Company. He sponsored the construction of the Episcopalian Cathedral Church of the Nativity. In partnership with noted industrialist Asa Packer, Robert Sayre championed the creation and development of Lehigh University.

The Center of Everything

The many institutions Sayre built, shaped and guided surround The Sayre Mansion. Lehigh Valley Railroad’s main headquarters was one block away. Lehigh University is visible on the hills to the front, while St. Luke’s Hospital is behind the property. The Episcopalian Cathedral Church sits directly across the street from the mansion, and behind it is the Fountain Hill Opera House. Below on the banks of the Lehigh River are the railroad and Bethlehem Iron Works. 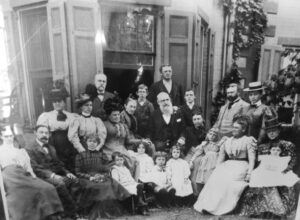 Robert Sayre lived in his residence at 250 Wyandotte Street until his death in 1907. During his nearly 50 years in the home, he raised eight children with four different wives. The growing family required additions to the home over the years. The original construction included the current reception area, parlor, dining room, guestroom 15, the basement, including the wine cellar, guestrooms 22-26 and guestrooms 31-35.

In the 1880s, Sayre added a wing to the left of the building’s original footprint, approaching the Wyandotte Street property boundary. The new addition consisted primarily of a three-story private library (now guestrooms 11 and 12, 20, 21 and 30). Sunlight cascaded through the glass roof, filtered through the leaded glass panels of the gold coffered ceiling and filled the entire library. Sayre amassed 15,000 books and employed a live-in librarian. He proudly collected some of the rarest volumes and encouraged people to visit his library. A gifted a copy of John Audubon’s “Birds of America” with hand painted watercolors was a prized possession. Today, the copy is valued in the $10 million range. Sadly, his fourth wife auctioned off the entire contents of the home after Sayre’s passing so not a single book remains on property.

The addition also included Sayre’s office, which is still intact as part of guestroom 11. The current Asa Packer Meeting Room in the lower level of the mansion was the foundation of the addition. Around this time The Carriage House was also added and housed the family’s horses and eight horse-drawn vehicles. The final modification completed under Robert Sayre included the kitchen and what is now guestrooms 27 and 28.

Around 1914, the mansion became a fraternity house. In the 1930s, the residence was converted into eight apartments and remained that way until the late 1980s. By 1990, the building was in such disrepair it was slated for demolition. A local couple saw the mansion’s potential to become an inn and worked to restore it to its original grandeur. The Sayre Mansion Inn opened as a bed and breakfast in 1993 after a multi-million-dollar restoration. In 2002, the current owners acquired The Carriage House, which had been parceled off decades earlier. With the purchase, the original Sayre Manion property was reunited