Live entertainment makes for an unforgettable night out. Combine the star power of events at nearby Wind Creek Events Center (formerly Sands) with the VIP treatment standard at The Sayre Mansion and turn an ordinary trip into an extraordinary getaway. The Mansion is just two miles from all the action but will transport you to another world of hospitality. Check out the diverse summer schedule at Wind Creek Event Center (formerly Sands), which is packed with a wide spectrum of talented performers. Here are some highlights.

Audiences will recognize Kevin James from his long-running sitcom “The King of Queens” and hit films such as “Paul Blart Mall Cop,” “Zookeeper” and “Grown Ups.” Since bursting on to the comedy scene in 1996, the Emmy Award nominee has made a name for himself as a talented writer, producer and actor. His comedy special, “Never Don’t Give Up,” recently aired on Netflix. James returns to his stand-up roots with this comedy tour.


In a career that spans over 40 years, Diana Ross has become an icon. She first shot to fame in the 1960s as the lead singer of The Supremes. She went solo in the 1970s and racked up an unprecedented 12 number one singles with hits such as “Ain’t No Mountain High Enough,” “Reach Out I’ll Be There” and “Endless Love.” She has continued to make music and tour throughout the world. Her long list of achievements includes a Grammy Lifetime Achievement Award, multiple American Music Awards and a special Tony Award. In 2007 she was acknowledged by the prestigious Kennedy Center Honors. The performance at Sands Event Center is part of Diamond Diana 75th Birthday:  A Year of Celebration Tour.

Fresh off the second season of his smash Netflix series, “Master of None,” the actor, writer, director and comedian brings his Road to Nowhere tour to Bethlehem. Anziz Ansari was one of the breakout stars of the hit sitcom “Parks and Recreation,” which ran on NBC for seven seasons. He has conducted several blockbuster stand-up comedy tours including two sold out performances at Madison Square Garden in 2015- a feat accomplished by only a handful of headlining comedians. Aziz won back-to-back Emmy Awards for Outstanding Writing for a Comedy Series for his work on “Master of None.” The show garnered multiple Emmy Award nominations in a variety of categories.

Live in Bethlehem- it’s “Saturday Night Live’s” head writer! Colin Jost has served as co-anchor of “Weekend Update” on the legendary sketch comedy program since 2013. His work on the show earned him four Writers Guild Awards, a Peabody Award and multiple Emmy Award nominations. He also wrote and starred in the Paramount/Netflix film “Staten Island Summer” based on his own experiences and most recently co-hosted the 2018 Emmy Awards.

Most know him as the front man of the wildly popular group Matchbox Twenty, but Rob Thomas has also made a name for himself as a solo performer and songwriter. His Chip Tooth Tour is in support of his recently released fourth solo album. The Grammy Award winner penned ubiquitous hits such as “Push,” “3 AM,” “If You’re Gone” and “Smooth.” He was the first-ever recipient of the Songwriter Hall of Fame’s Hal David Starlight Award which recognizes young composers who have already made a lasting impact. Thomas’ electrifying live performances have won him a loyal following making his concerts a favorite among audience goers.

The group has amassed legions of fans since first arriving on the scene in 1962. Their music provided the soundtrack for a generation with hits such as “Big Girls Don’t Cry,” “Walk Like a Man” and “Can’t Take My Eyes Off of You.” The group is experiencing a resurgence thanks to the Tony Award winning musical “Jersey Boys,” which chronicles The Four Seasons’ rise to stardom. Between 1962 and 1978, Frankie Vallie and the Four Seasons sold over 100 million records. In 1990, they were inducted into the Rock and Roll Hall of Fame. They continue to tour worldwide performing timeless hits that appeal to every age.

The legendary crooner returns to Bethlehem! At 93, he’s still entertaining audiences throughout the world with selections from the Great American Songbook. Tony Bennett’s voice is known to generations of fans. His renditions of songs such as “I Left My Heart in San Francisco,” “Stranger in Paradise” and “Steppin Out with My Baby” are iconic. He has sold over 50 million records in a career that spans more than 60 years. Bennett’s long list of accomplishments include 19 Grammy Awards, two Emmy Awards and recognition as a Kennedy Center honoree.

He’s one of the most popular stand up comedians in show business today. He’s performed to sell out crowds around the world and is one of only a few comedy headliners to sell out Madison Square Garden, LA’s Staples Center and the Sydney Opera House in Australia. Gabriel Iglesias’ brand of comedy incorporates storytelling, parodies, characters and sound effects. His unique style has earned him fans throughout the world, a YouTube channel that has over 380 million views and a social media fan base 14 million people strong. His sitcom, “Mr. Iglesias,” premiers on Netflix this summer. Iglesias brings his tour, “Beyond the Fluffy,” to Bethlehem for three sure-to-be-uproarious shows.

Though he went on to act in film and TV, Dane Cook got his star as a stand-up comedian. He recorded five comedy albums including “Retaliation,” which became the highest charting comedy album in 28 years. His film credits include “Employee of the Month,” “Good Luck Chuck” and “Dan in Real Life.” Cook’s “Tell It Like It Is” tour is his first full-scale stand-up tour in six years.

Retreat to The Sayre Mansion 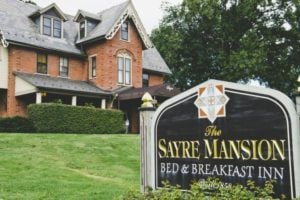