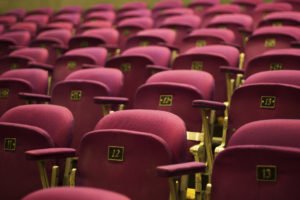 The Lehigh Valley is a wonderful place to go for great entertainment. The Sands Bethlehem Event Center and the SteelStacks campus in Bethlehem are both excellent venues to see musical acts and more. Another great place to catch a show is the State Theatre in Easton, PA. This theatre presents big-name musical and theatrical acts that delight audiences. So next time you head to the Lehigh Valley for a stay at the Sayre Mansion, make sure you make time to take in a show at the State Theatre of Easton, PA.

About the State Theatre Easton, PA

The State Theatre in Easton, PA has a long history in the Lehigh Valley. The current building began to take form in 1910 as the bank building that stood there was modified into a vaudeville house. Later in 1926, the building was renovated to include the large auditorium, balcony, and ornate decorations. The building is in the Beaux-Arts style with a cut stone facade with a large overhanging marquee. The building is also part of a paranormal legend, as it is believed by some to be haunted by the ghost of J. Fred Osterstock, who managed the theatre from 1936-1965.

The variety of upcoming shows at the State Theater in Easton, PA means that you’re sure to find one that you want to attend. Performances include musical acts from all genres, comedy shows, musicals, and more. Check out what is coming to the Sate Theatre of Easton, PA.

—
When you’re planning to see a show at the State Theatre in Easton, PA, be sure to book your stay at the Sayre Mansion. Our beautiful Bethlehem property is the ideal place to relax and unwind during your time in the Lehigh Valley. Plus, our location in the heart of Bethlehem means that you’ll be close to all of the shopping, dining, and entertainment in town. And you’re just a short drive away from the rest of the attractions in the area. Our rooms and suites offer guests the perfect combination of old-world style and modern amenities, making our accommodations extremely comfortable. Each morning you’ll be treated to a full innkeeper’s breakfast, so you can start your days off on a delicious note. At the Sayre Mansion, we want you to have the best experience in the Lehigh Valley possible. We can’t wait to see you soon!